Unexpected Love, Meant to Be

I haven’t always been brave enough to acknowledge or accept some of the opportunities for love that have crossed my path. I’ve missed a few, some of which I regret. I’m sure there are other moments that I may not have been aware enough to recognize that I missed.

One such opportunity presented itself a couple of weeks ago. I wasn’t looking for it, but it happened anyway. I completed a difficult set of training classes for work in the morning, had a wonderful catch up lunch with a friend I’d not seen in three years, and then went to run some errands. One of the errands was to take a couple of cases of canned cat food that my cats had tried, enjoyed the first couple of cans, but then refused to eat again, to a local shelter. I’ve adopted several cats from them over the years and I support their work.

After dropping off the donation, I went to have a look at the cats that were there. I was making the rounds, saying hello – and hearing a meowing behind me. When I finally got to that particular cat, I was surprised to meet a handsome gentleman of 13 years. We chatted a bit. I felt it coming and I didn’t push it away. I went to go ask about his story. Turned out he’d been in the shelter for 2 months already. His ‘mom’ had to give him up because she had a bad knee, was undergoing kidney dialysis three times a week, and chemotherapy for blood cancer, and just couldn’t take care of him anymore. She’d had him since he was a 5 month old kitten. I asked to have a closer meeting with this boy, named Caesar. (This was also a bit of a “zinger” moment. I previously had a cat named Claudius, who lived to the age of 17. He had cancer and his body had enough nearly two years ago. I lost my Claudius, but I’ve found a Caesar.)

I said I’d take him home, and started the paperwork and checkout process to make him mine. It’s been a couple of weeks and he’s still a little shy with me. The paperwork did imply that he wasn’t really used to men. I had a friend who wanted to meet him come visit – this friend has a deeper voice than mine; and his voice caused the cat some anxiety.  He’s separated from the other cats in my household for now, with gates. They can see and smell each other, but that’s it. Even though he’s shy, he has been so very grateful to have a home again. He’s purred loudly every time I go talk to him. He’s eating very well, and sleeping comfortably stretched out in his room. He’s healthy for his age, and getting stronger and more confident each day.

Why do fools fall in love? I don’t know. I felt the free fall coming when I first met Caesar, and it’s continued. Other people have commented that I must be good-hearted to take in an older cat. I’ve gotten kudos over this adoption that I’m not sure I deserve, particularly since I’m well aware of my sins and imperfections. It felt right, and I accepted the risk and opportunity instead of walking away. We’re both happier for it.

Sometimes you have to leave your heart open. Then you have to be willing to take the risk. 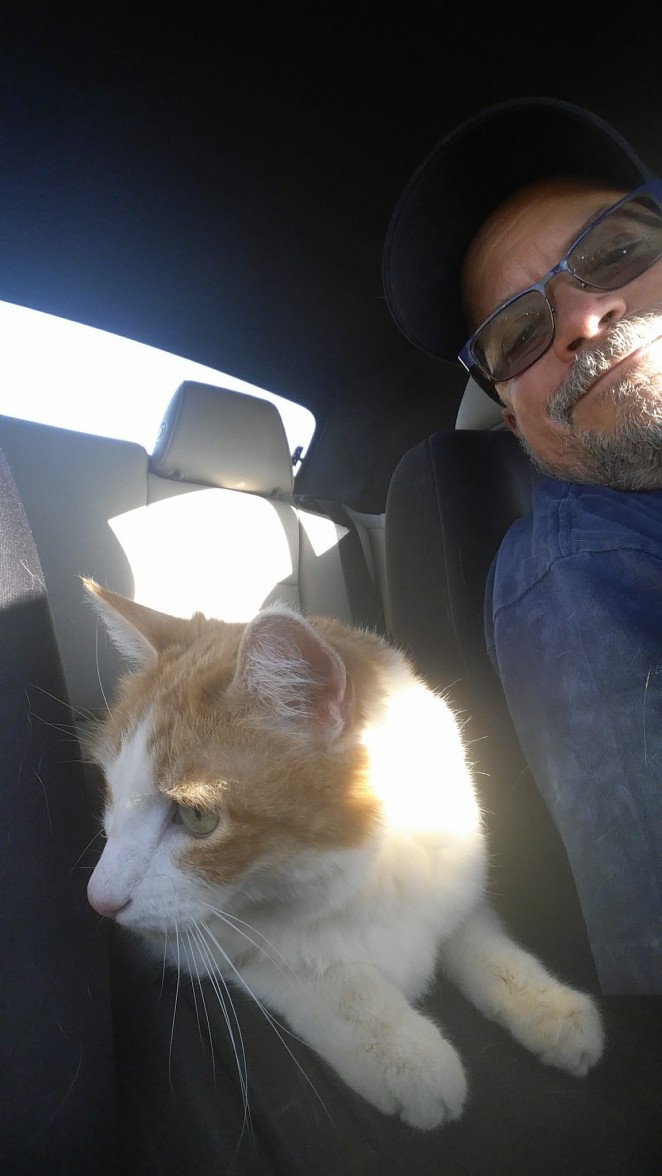 Two years later, and Caesar is still going strong. He calls for me to come to bed and sleeps by my head every single night. He loves it when I don’t have to get up right away and can sleep in for extra cuddles in the morning. He loves supper time. I’ve had to add litter boxes in places I don’t like to accommodate him and the other cats, but I don’t care in comparison to the joy he adds to my life.

I wasn’t sure how much time I would get with a 13 year old cat when I adopted him, but every minute has been worth it. It’s been a wonderful two years, and I love this guy.